Hacking
*QUICK, HILARIOUS WAY TO PRANK YOUR FRIENDS ON ANDROID, 100% FREE AND AD-FREE*

*QUICK, HILARIOUS WAY TO PRANK YOUR FRIENDS ON ANDROID, 100% FREE AND AD-FREE*

This is a clean, simple app to quickly edit a device’s contact list, which my friend and I originally built in college as a prank. Hilarious mayhem is only a few clicks away!

ALL IS ONE
The original purpose of this app, you can rename all of the device’s contacts to a single name. Whether it’s your favorite meme with “Harambe” or a generic name like “Steve”, the app will get it done and all shall become one.

GRAB BAG FUN TIME
A twist on the app’s original purpose, this feature allows you to randomly rename all of the contacts to something from a name pool that you build. The pool can have up to 5 names, and you can also use one of the app’s pre-built “Grab Bags” to rename everyone after some of the world’s favorite groups like “The Avengers” and “The 3 Musketeers”.

NO HARM DONE
This app is meant to be a fun prank, not a way to permanently mess up somebody’s device. After you’re done with your mischief, simply click the “Undo Changes” button to restore the device’s contacts list. We take this feature very seriously; even if you delete the app and reinstall it, it will be able to undo any changes it made.

If there are any bugs or additional features you would like, please let me know in your review!

This app is open-source! Help me make it better at: https://github.com/Gear61/Contacts-Hacker

Contacts Hacker - A Prank App
RandomAppsInc
Showing permissions for all versions of this app
This app has access to: 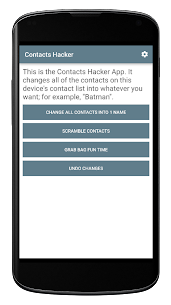 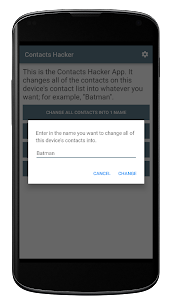 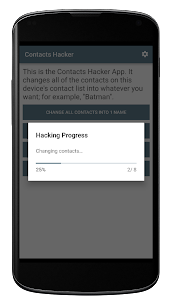 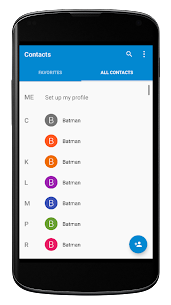 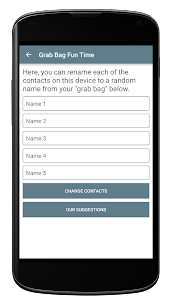 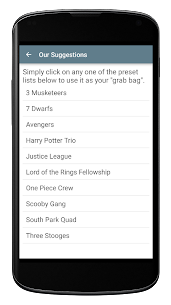 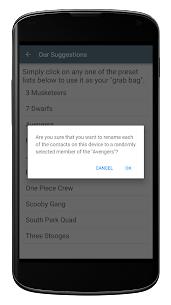 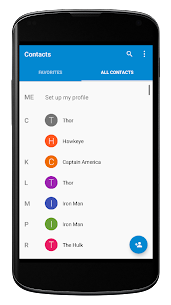