Mangaluru, December 24: “The Minds of the Youth of Tulunadu are filled with common poison and become dead. In private factories, Marwaris from Gujarat are working. While moral policing is done non-stop, the police are acting as agents of the RSS,” said BK Imtiyaz, DYFI Dakshina Kannada district president.

Imtiyaz was speaking at the protest held by the DYFI Ullal committee against Sangh-instigated goondaism near Thokottu bus stand.

Imtiyaz further said, “MRPL built on land in Tulunadu called 94 people for interview. Only three people from Tulunadu have jobs. Only 14 people from Karnataka have jobs in MRPL. Out of them eight are Marwaris who are settled in Bengaluru and call themselves Kannadigas. Sangh Parivar has not talking about such matters, but the common poisonous seeds fill the minds of the youth of Tulunadu and kill them. 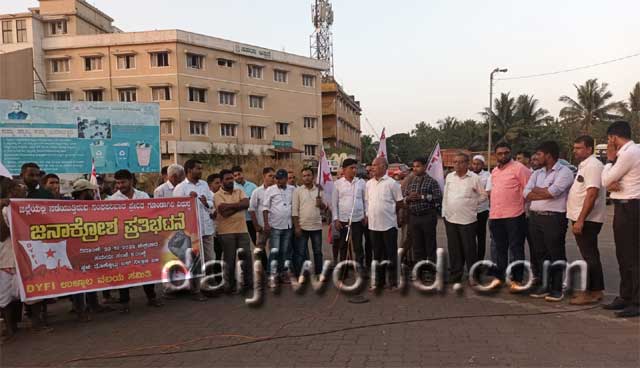 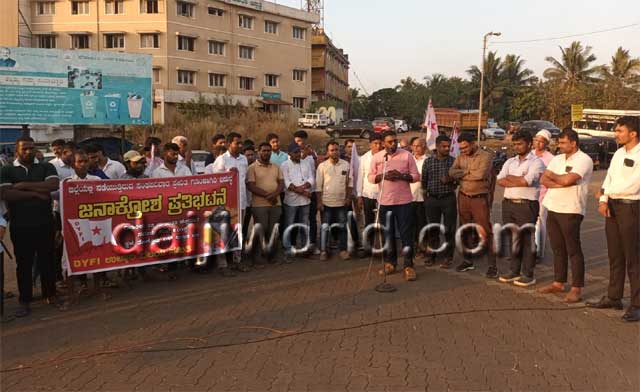 “Innocent Issac is brutally attacked just for helping a woman in the bus by taking her bag. The police who are supposed to take action against the Sangh Parivar goondas bail them out.

“During the sting operation by Tehelka, the then MLC Ganesh Karnik clearly said that all policemen are from RSS background. Now it is proved.

“Sand mafias, lottery mafias, tar mafias and petrol mafias are doing illegal work without any fear. The police does not raise any voice or take any action against them.

“A madman in Thokottu is constantly writing against the communists and asking to be sent to China. The police have not arrested him. People don’t know that communists don’t need MLAs to fight for them. If the Ullal police do not take action against that person, DYFI will protest in the coming days.’

District executive committee member Sukumar said, “India ranks below Pakistan and Afghanistan in terms of violence as per UNESCO report. Minorities are attacked for political gains. In Gujarat, people were emotionally blackmailed by reminding them of the Godhra incident.

“Though Kartik Raj was killed by his sister, MP Nalin Kumar Kateel said minorities do it and threatened to set fire to the entire Dakshina Kannada district. Today Sangh Parivar is not capable of creating communal violence, so it attacks minorities,” he said. .