A newborn was found in the toilet of a government school in Trichy, Tamil Nadu on Wednesday morning. He was taken to the hospital, but the doctors pronounced him dead. The police have registered a case and are conducting further investigations into the matter. 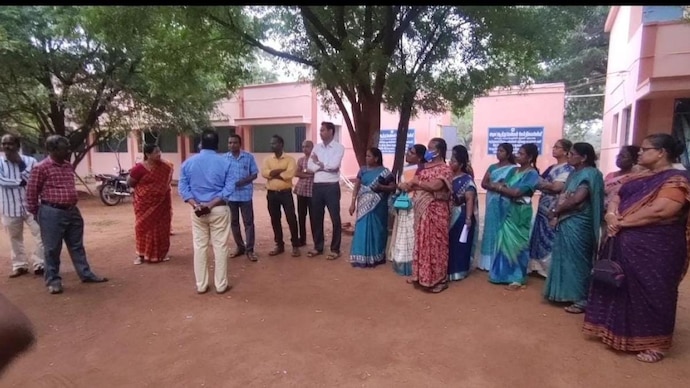 District officials are conducting an investigation at the Trichy school where a newborn baby was found dead.

By Akshaya Nath: On Wednesday, December 7, a newborn baby was found inside the premises of a government school in Trichy, Tamil Nadu. The child was taken to the hospital but the doctors declared him dead. The police have registered a case in this connection and are investigating the matter.

The newborn who was found inside a government school was only a few hours old. The child was found dead in the toilet of the school in Kattur area of ​​Trichy near Thiruverumbur.

The school principal informed the police. The police complaint said, “When the school health worker Shantha entered the bathroom, she found an unknown newborn baby there with bloody wounds.” On getting the information, the complainant referred it to GH, Trichy, but the doctor stated. like brought dead

The police have registered a case regarding this incident and filed a case under Section 174 of the Criminal Procedure Code (CrPC). Police are investigating whether the child was born in the school’s toilet or whether someone threw the newborn into the school’s toilet.

Other angles are also being investigated by the police. In the meantime, forensic experts were called to identify clues from the scene. Officials from Adi Dravidar Welfare Department, Tehsildar Chandra Devanathan and School Education Department attended and conducted an investigation after receiving information about the incident.

The parents of the students of the school have now demanded that proper security guards be appointed and CCTV cameras installed in the school to prevent such untoward incidents.