Between May 2019 and May 2020, the Andhra government spent over Rs 100 crore on print advertisements in Telugu newspapers, 52% of its allocation on Sakshi, the RTI document reveals.

A few days ago, one of us filed a PIL in the Andhra Pradesh High Court regarding questionable expenditure by the Andhra Pradesh government on advertisements in print and electronic media. To give some background, an RTI report revealed that the current government spends a disproportionate share of its information and broadcasting expenditure on Sakshi newspapers and its TV channel. Along with this, there are poor allocations for other popular news. Such spending betrays conflict-of-interest issues and penalizes critical media organizations, depriving them of much-needed public revenue.

Between May 23, 2019 and May 30, 2020, the Andhra Pradesh government spent ₹100.8 crore on print advertisements in Telugu newspapers, the RTI document reveals. The principle behind these advertisements is to create awareness among people about government schemes and projects, welfare programs and other state initiatives. Advertisements inform about potential rights, eligibility requirements, application portals and other necessary details. It becomes critical that the government spends money to ensure that most people are aware of these benefits.

According to the Circulation Audit Office, between July and December 2019, Eenadu (16 lakh subscribers), Sakshi (10.6 lakh subscribers) and Andhra Jyothi (6.6 lakh subscribers) have the highest readership in AP. The government spent 52% of the broadcast allocation on Sakshi and 39.3% on Eenadu. Despite its large readership, Andhra Jyothi accounted for only 0.25% of the spend, much less than smaller dailies like Vaartha and Andhra Prabha. Politicians often claim that they do not discriminate on the basis of caste, class, religion or ideology. Looking at these figures, it is obvious that they discriminate depending on the newspaper you read. Readers of Andhra Jyothi and other outlets are missing out on important information that can impact their lives. Their fundamental right to information is violated. 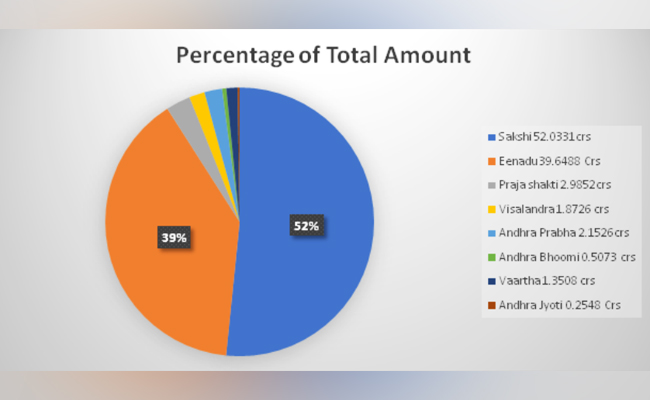 This skewed spending reveals two other problems. Due to their underdeveloped revenue models, newspapers are particularly dependent on these revenues. Starved of funds despite its obvious popularity, the government mutes its voice. In Andhra’s political landscape, Eenadu and Andhra Jyothi are said to be supporters of the opposition TDP and unlike Sakshi are critical of the YSRCP government. By disproportionately prioritizing small newspapers, the government has turned these publications into its mouthpiece. Beyond preferring newspapers affiliated to the ruling party, preferring Sakshi also raises the issue of conflict of interest. Members of Chief Minister Jagan Mohan Reddy are board members of the company that owns Sakshi. Just as US President Donald Trump hosts world leaders at his resorts, it becomes a case of enriching the head of government’s family.

In its landmark judgment on this issue (Common Cause vs Union of India), the Supreme Court used its extraordinary powers under Article 142 to issue necessary guidelines on government messaging. The SC recommended that publication of photographs of chief ministers and their cabinet colleagues is permissible if it is deemed essential for effective government messaging. This is in direct contrast to the publication of other leaders, dead or alive, who may be considered important by the ruling party. The court also determined that “the patronage of any particular media should be avoided and the provision of advertisements should be the same for all newspapers, however classified according to their circulation.” It is clear that patronage should be avoided and circulation should be prioritized.

The full-page ads themselves rely on having giant pictures of the chief minister or other important leaders, while the actual information is relegated to a corner in a small font. This is not just about the current government or just Andhra Pradesh. Publicizing the greatness of a leader or party at public expense and in exchange for the transmission of valuable information is a gross misuse of public funds for private and political gain. Advertisements become a source of self-aggrandizement rather than a genuine attempt to inform people. The main guidelines of the Supreme Court are as follows:

(2) Advertising materials must be presented in an objective, fair and accessible manner and must be designed to meet the objectives of the campaign.

(4) Advertising campaigns must be justified and carried out in an efficient and profitable manner.

We also propose that since it is public money used to enlighten the citizens, a small part of it should also be allocated to the Opposition parties. By making critical advertisements in the newspapers, the opposition will continue to fulfill its legislative role even outside the legislature – holding the government to account. Just as the government pays for its leaders to have great proclamations and praises, the Opposition must also be empowered to show the other side of its performance. To eliminate abuse of power, both government and opposition spending should be reviewed by an independent body composed of eminent jurists and NGOs. This organization could also measure the actual impact on the ground of spending above a certain amount. Failure to make a course correction will end up further eroding our democracy.

Vamsi Viraj is an alumnus of IIT Chennai and a political analyst. Naga Sravan Kilaru is a 2018 National Youth Awardee and a political activist who has worked with the TDP. The opinions expressed are those of the authors.