Princess Charlotte stole the show last night as the animated young royal enjoyed the Christmas magic at the carol service hosted by her mother, the Princess of Wales.

The Together at Christmas service was dedicated to Queen Elizabeth II and hosted by Kate after being recorded at Westminster Abbey earlier this month.

Audiences praised the joy displayed by the well-behaved princess, seven, with one moment showing her reacting excitedly to a reading from Paddington Bear by actor Hugh Bonneville.

Charlotte stole viewers’ hearts with her ‘priceless’ reaction as her face lit up during the tribute to the late Queen, her great-grandmother. 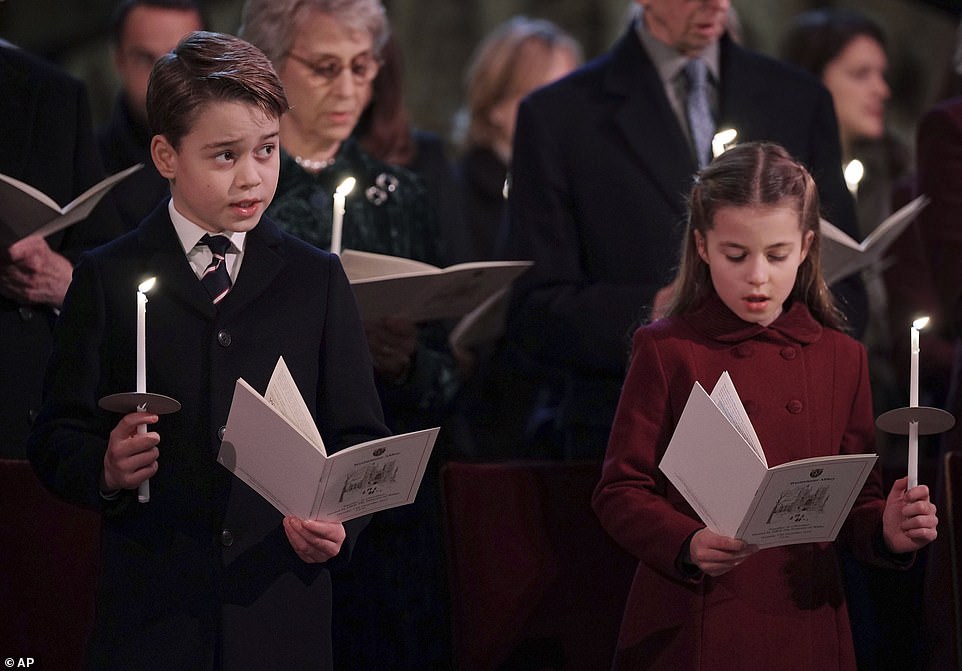 The seven-year-old was also filmed singing along heartily to Away in a Manger next to her older brother Prince George, nine, as the siblings sat in the front row 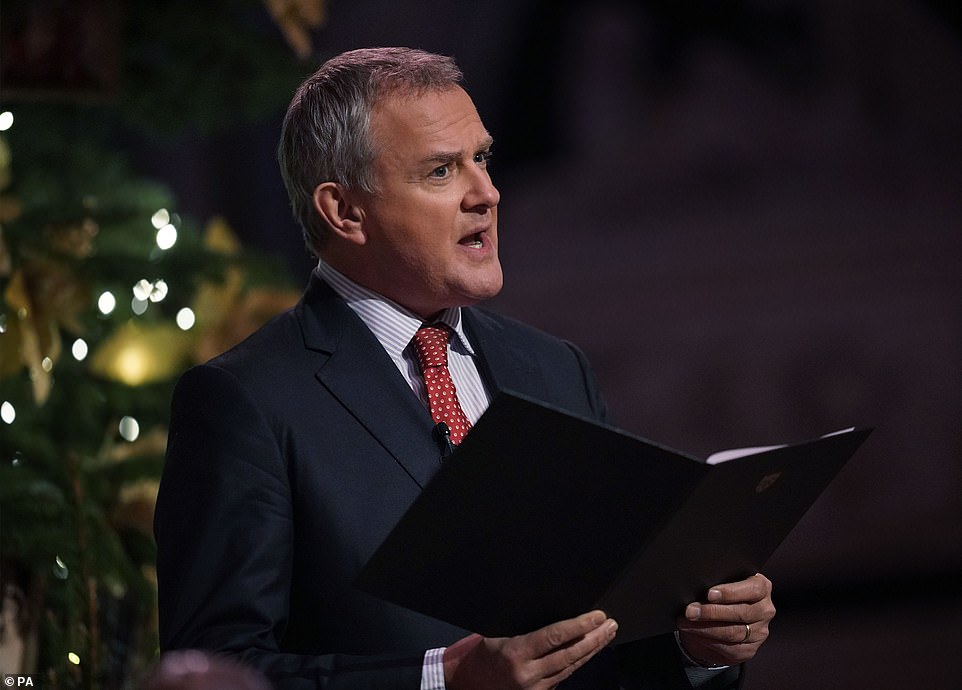 In another touching tribute to the late monarch, musician Alexis Ffrench played In The Bleak Midwinter on a grand piano emblazoned with the Queen’s image from different stages of her life and reign.

The event was attended by King Charles III, the Queen Consort and the Prince and Princess of Wales, as well as Prince George, nine, and Princess Charlotte.

Speaking at the start of the programme, Kate said: ‘This Christmas will be our first without her late Majesty Queen Elizabeth.

‘Her Majesty held Christmas close to her heart as a time that brought us together.’

Later in the show, Kate describes a sweet connection between the late Queen and her young children. 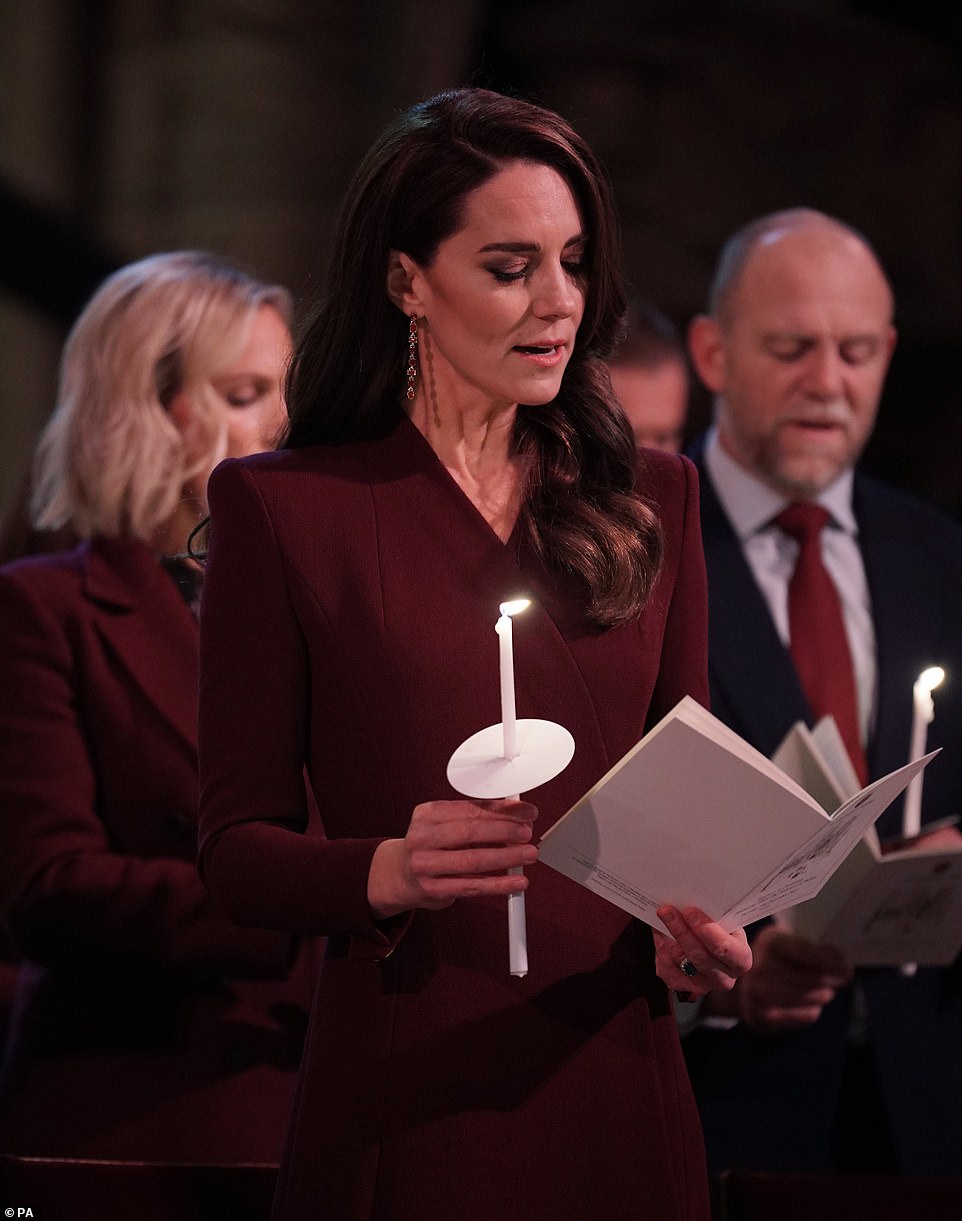 Sharing a family photo of Queen as a child putting on a Christmas production, the Princess says: ‘It really resonated with me, and seeing Her Majesty here doing the production on Christmas day during the second world war, which I thought was really special.

Two of the Prince and Princess of Wales’ children were in attendance at the concert, with their youngest, the famously cheeky Prince Louis, absent from the event.

Prince George and Princess Charlotte did their parents proud as the young royals dutifully followed Kate and Wills’ examples.

They sang in full voice at the service, wearing black and red outfits which matched their father and mother’s respectively. 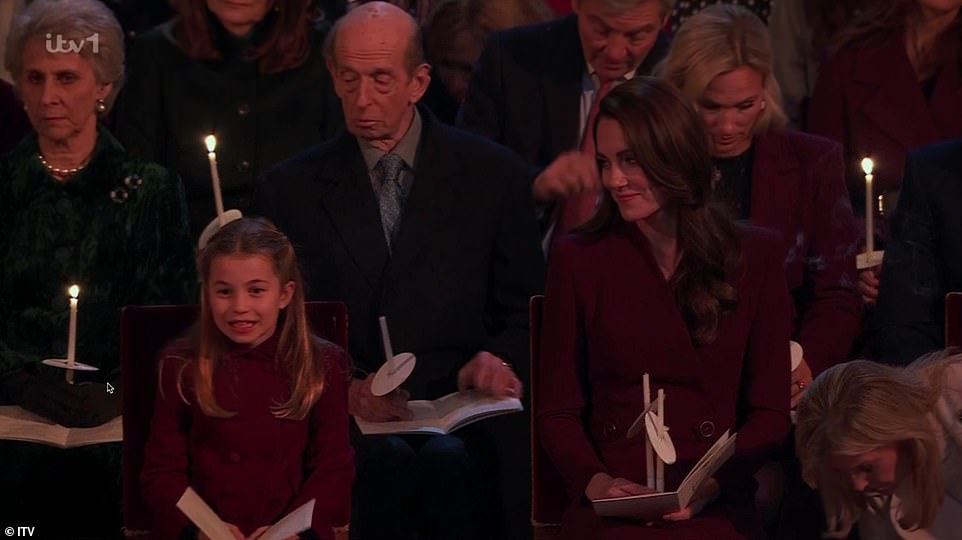 Charlotte beamed as she heard the reference to the marmalade-loving bear, who filmed an iconic sketch with her grandmother the Queen for her platinum jubilee in June 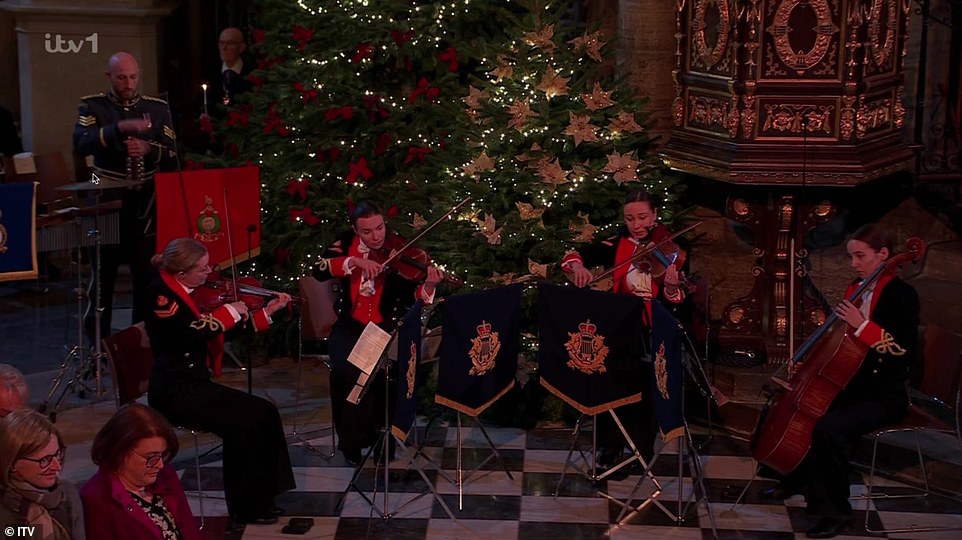 ‘Dear Aunt Lucy,’ Hugh read as music played in the background, ‘Today it was Christmas Day, and something wonderful happened!’

Princess Charlotte was dressed in a smart burgundy coat and furred collar with her hair clipped back, as well as mary-jane shoes

The young princess was the spitting image of her mother, who also wore a sleek burgundy coat for the occasion, which she paired with elegant heels.

The Wales family were perfectly coordinated, as George also appeared as a mini William, wearing a smart suit with a navy and white tie.

This is the first time they have attended the service like this and arrived holding hands with their parents. 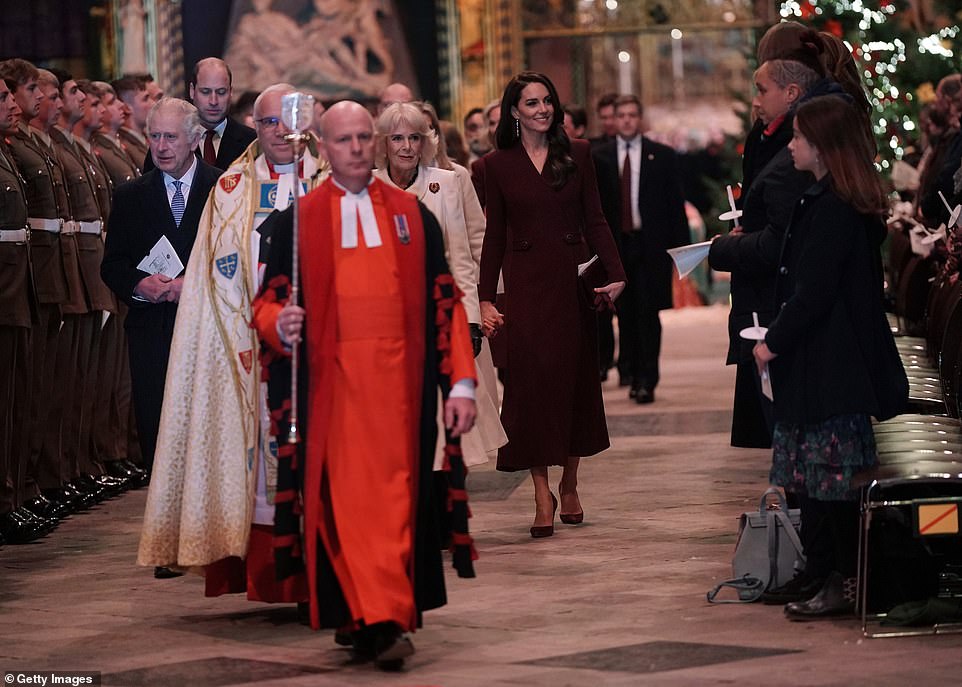 Prince George and Princess Charlotte held their parents hands as they entered the service. The young royals processed into the Abbey along with their grandfather, the King 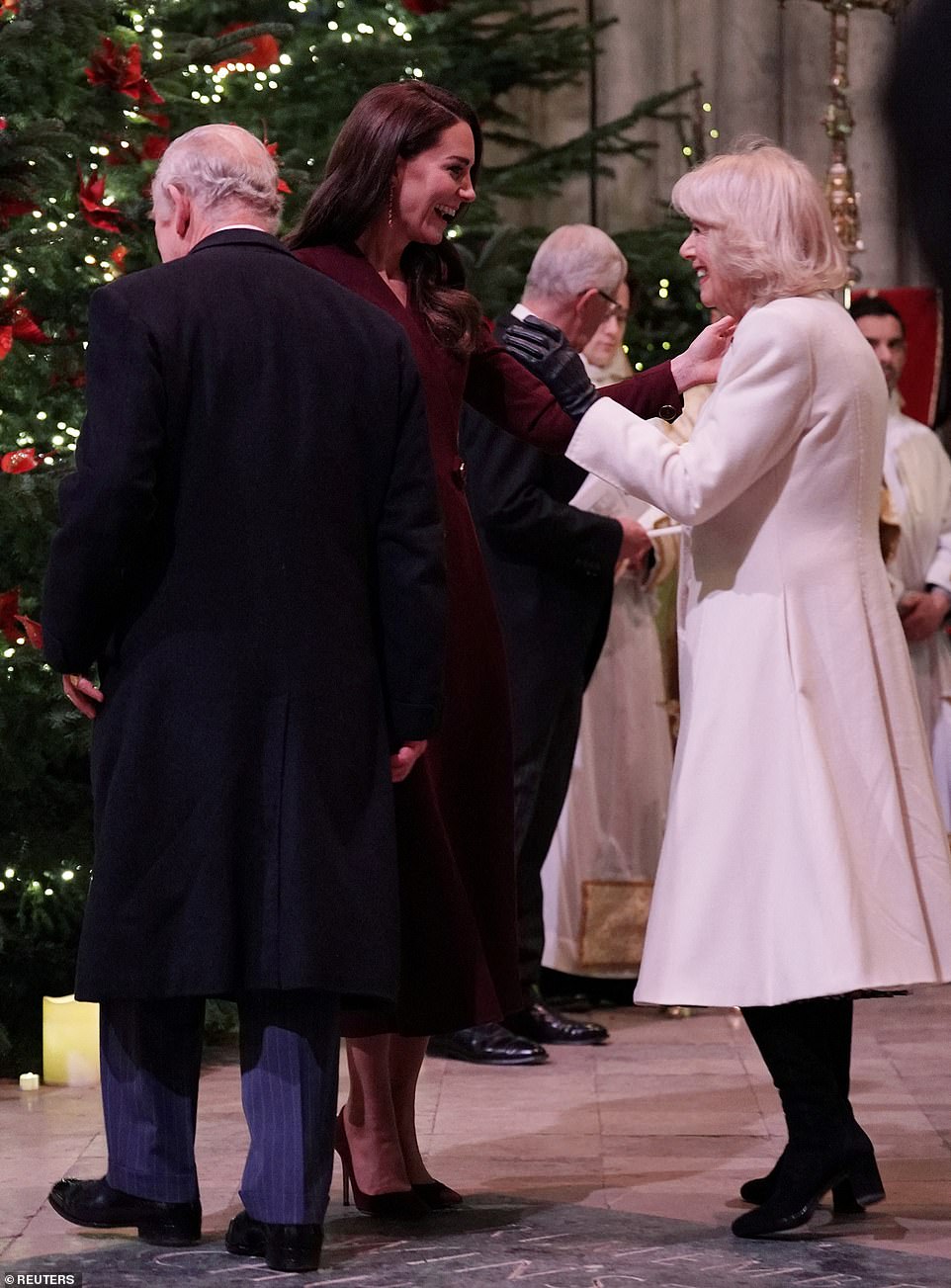 The Princess of Wales beamed as she greeted Camilla, the Queen Consort, as the royal family entered the service

And the royal siblings were undoubtedly comforted by the carol service’s family-friendly contents. Charlotte beamed as she heard the reference to Paddington, who filmed an iconic sketch with the late Queen for her platinum jubilee in June.

A Christmas tree in the abbey was decorated with small Paddington Bear decorations, a nod to the late Queen’s famous sketch, while guests were greeted with atmospheric snowflakes from a snow machine as they arrived at the entrance.

As they joined the congregation in singing carols, Prince George and his younger sister held candles and appeared to be on their best behaviour.

George and Charlotte were among more than 1,800 people at the televised service, which aired on ITV1 on Christmas Eve and was narrated by Catherine Zeta-Jones.

Kate was seen at one point with a comforting arm around Charlotte’s shoulder, while the Prince of Wales placed a guiding hand on his son George’s back. 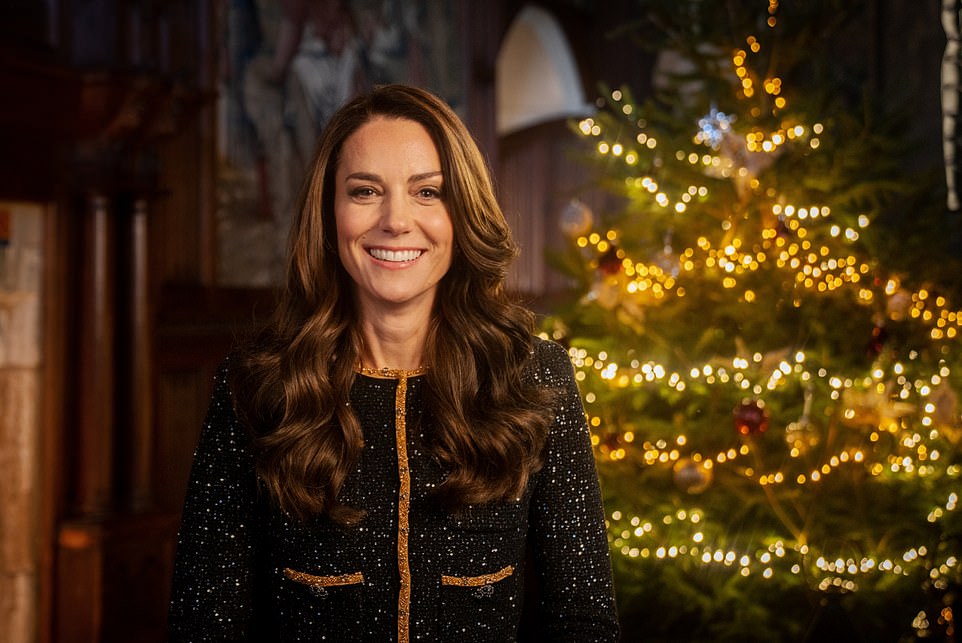 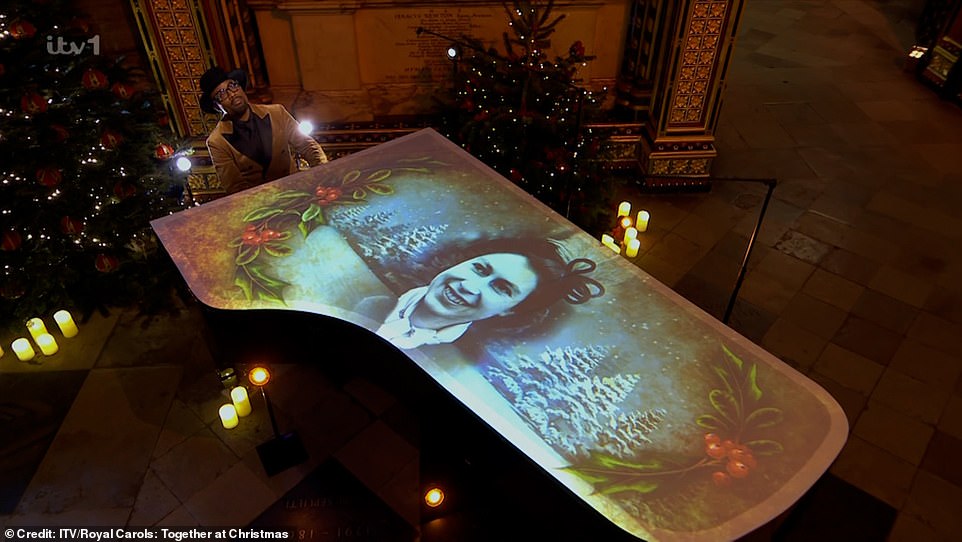 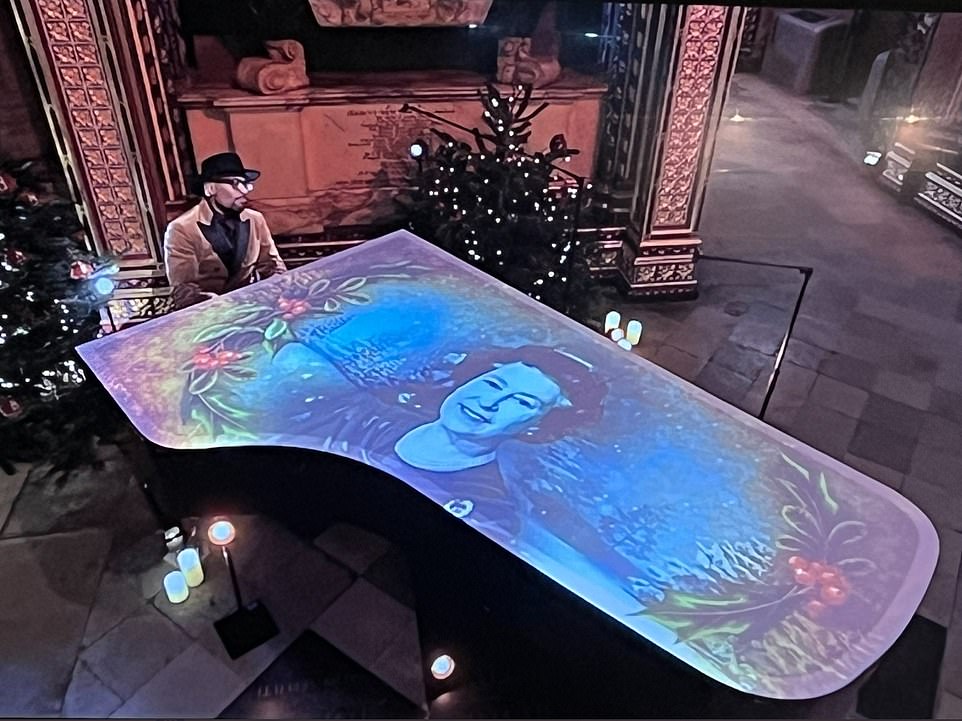 In a touching tribute to her late Majesty, musician Alexis Ffrench played In The Bleak Midwinter on a grand piano emblazoned with the Queen’s image 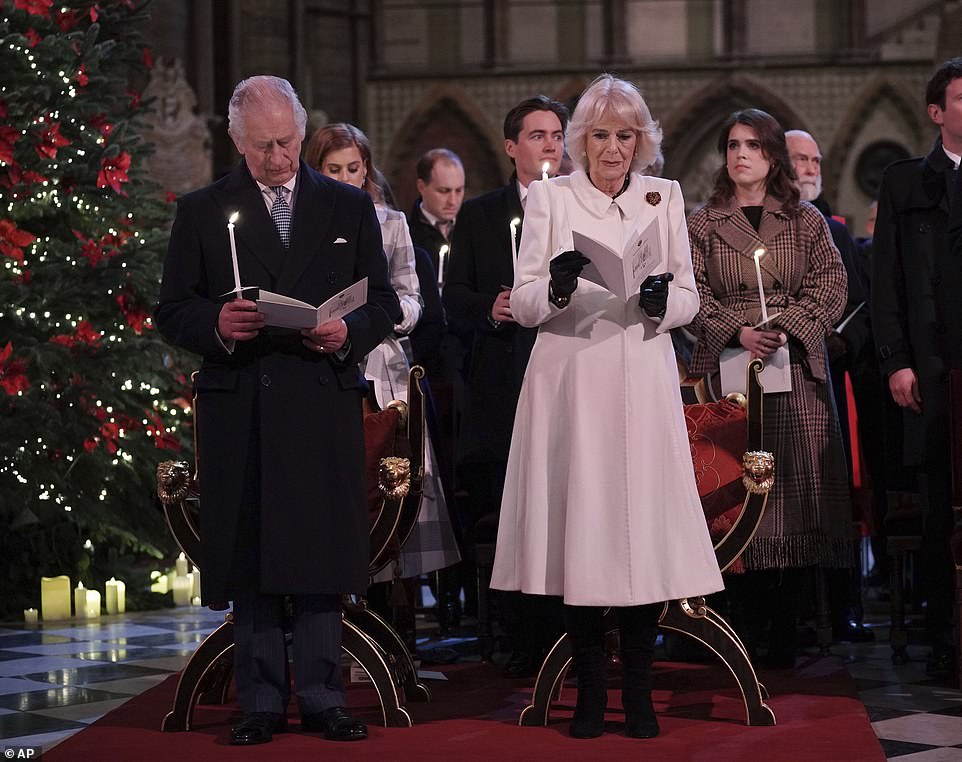 The event , dedicated to the late Queen Elizabeth II, was attended by King Charles III and Camilla, the Queen Consort

During the introduction to the service, given by Kate, the Princess explained that it aimed to ‘continue Her Majesty’s tradition of thanking those who have gone above and beyond to support others.’

‘Her Majesty leaves with us an incredible legacy and one that has deeply inspired many of us.

‘This year’s carol service is dedicated to her and to all those who are sadly no longer with us.’

Among those in attendance were other senior members of the royal family, including Princesses Eugenie and Beatrice.

Audiences watching the service expressed their emotion at the poignant images shown of the Queen on a grand piano played by Ffrench, a composer who is the Artistic Director at the Associated Board of the Royal Schools of Music. 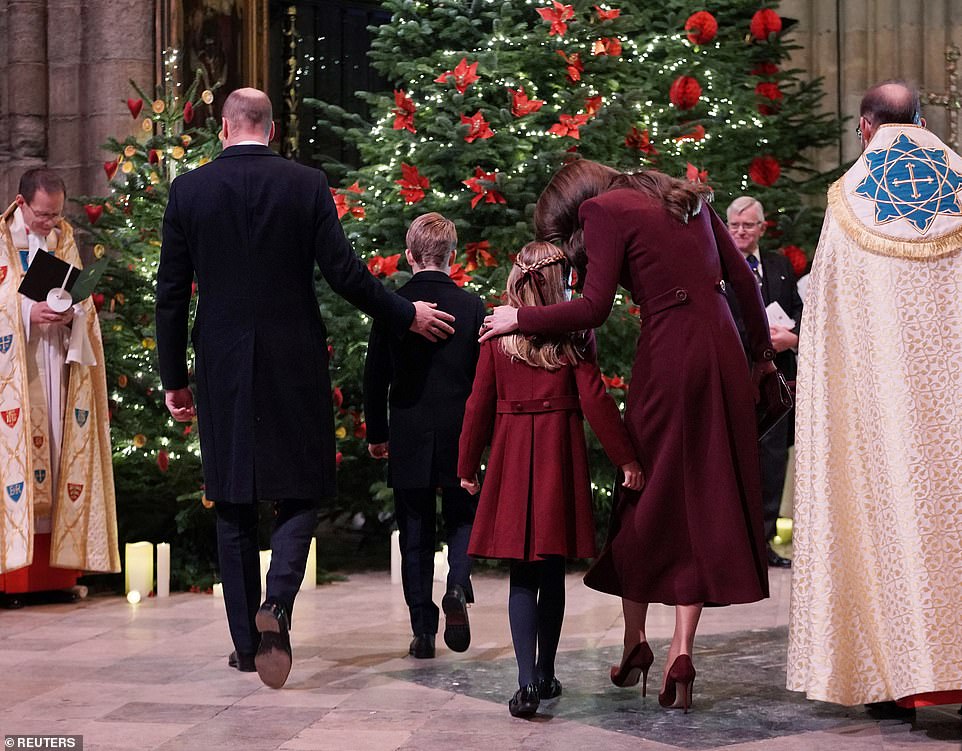 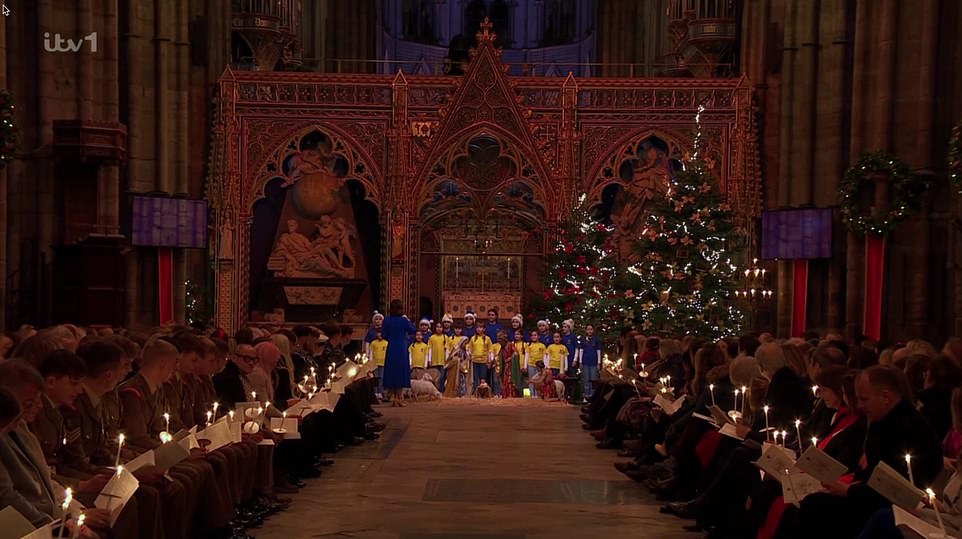 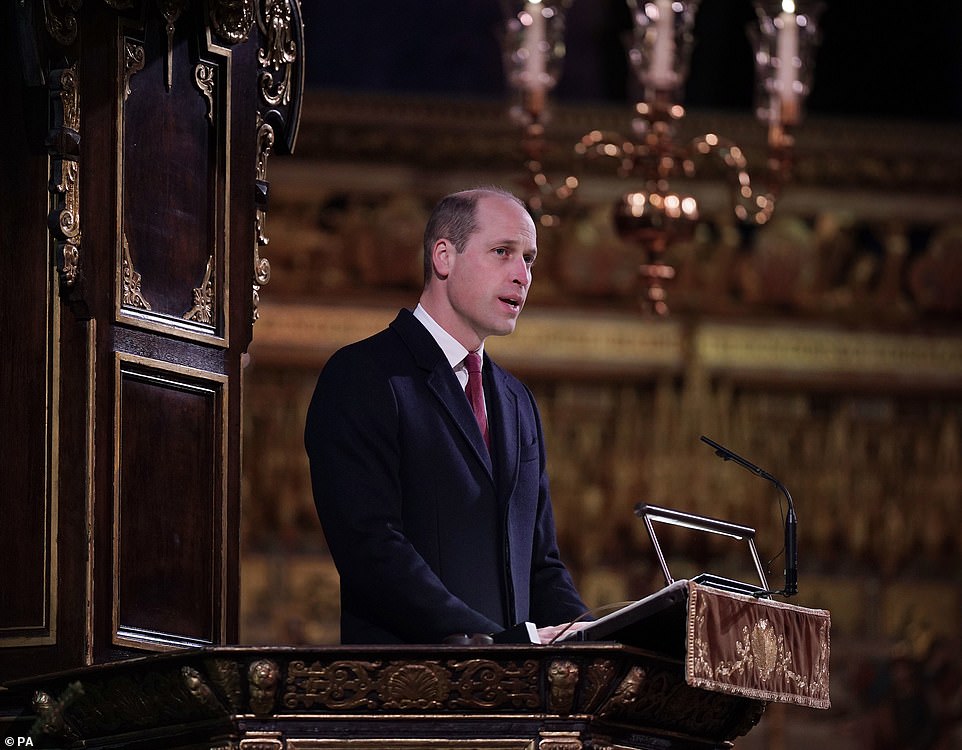 The Prince of Wales, reading an extract from Queen Elizabeth II’s Christmas Message 2012, during the ‘Together at Christmas’ Carol Service at Westminster Abbe

In one of the most poignant sections of the service, William, Prince of Wales, read an extract from the late Queen’s 2012 Christmas message.

Reading her Majesty’s words, he says: ‘At Christmas I’m always struck by how the spirit of togetherness lies also at the heart of the Christmas story.

‘A young mother and a dutiful father with their baby were joined by poor shepherds and visitors from afar. They came with their gifts to worship the Christ Child. 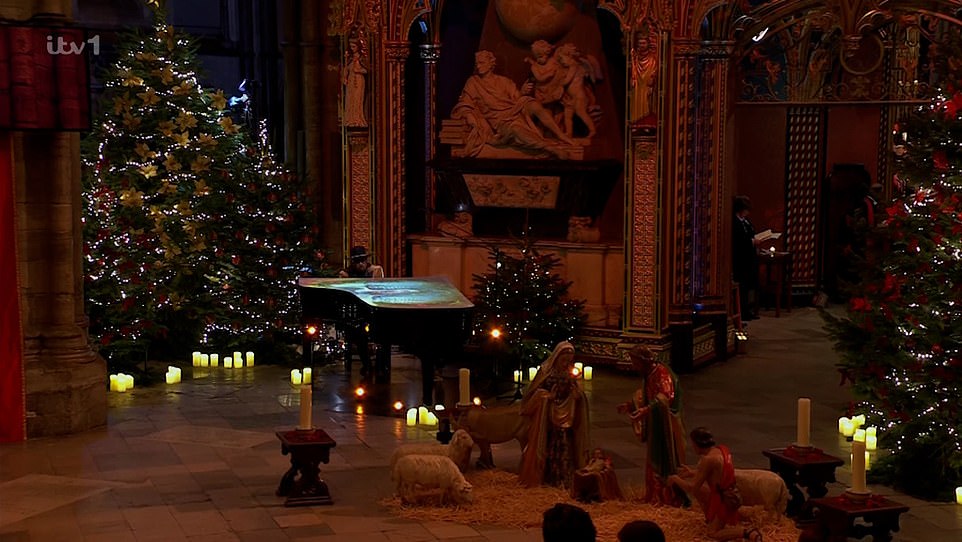 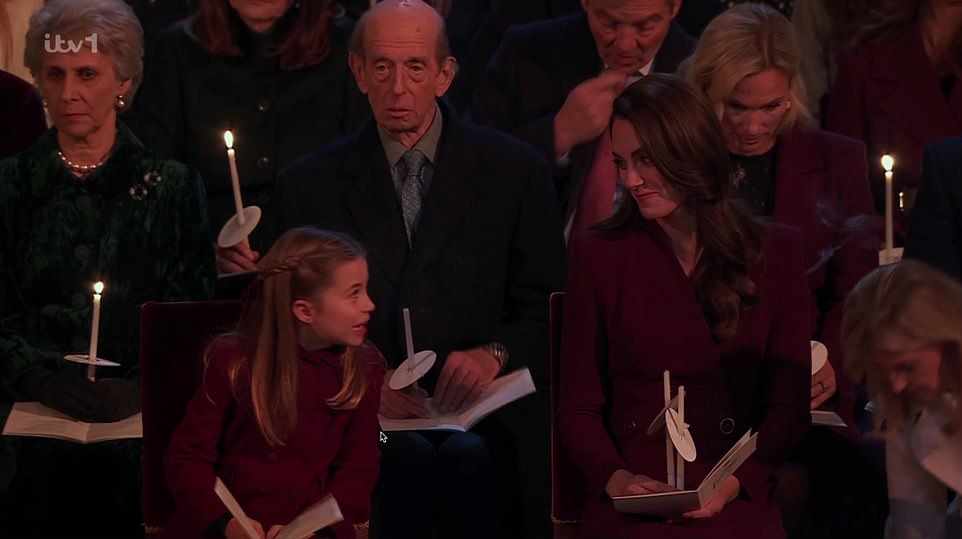 A sweet moment between a mother and daughter: Princess Charlotte chats to her mum during the service as Kate proudly smiles back at her little girl 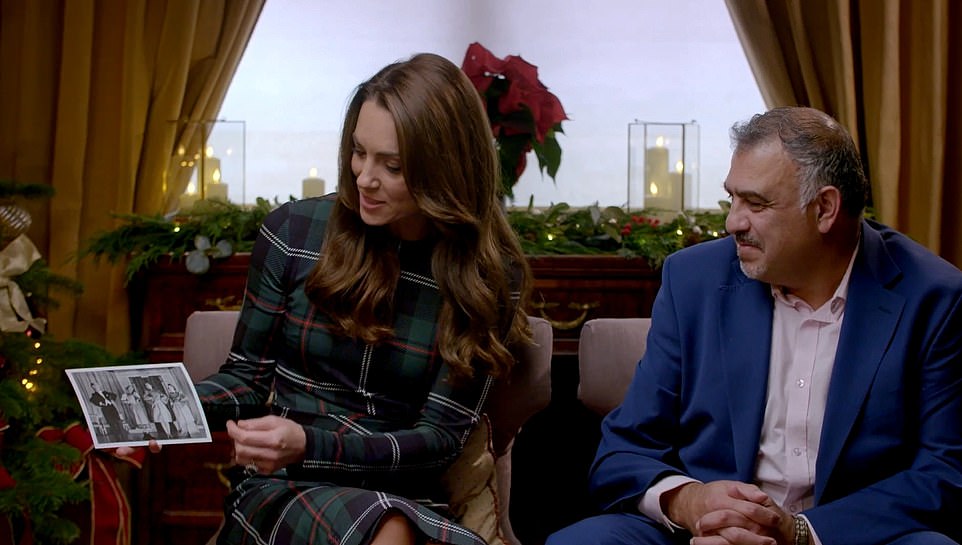 Kate hosted three people who have gone ‘above and beyond’ for their communities at Windsor Castle, and thanked them all for their service

Senior royals were in attendance at the Princess of Wales’ second annual carol service, which was filmed on December 15 and broadcast on Christmas Eve.

Among them were Kate and William, as well as heir to the throne Prince George and his sister Princess Charlotte. The couple’s youngest, Prince Louis, was not in attendance.

Zara and Mike Tindall also made an appearance.

Other attendees included Kate’s mother Carole Middleton and her sister, Pippa, along with her husband James Matthews.

Sophie, Countess of Wessex, sat beside the Princess of Wales during the service.

Prince Edward, the Duke of Kent, one of the late Queen’s cousins, also joined the congregation.

King Charles III’s siblings, Princess Anne, Prince Andrew and Prince Edward, did not appear to be at the event.

‘From that day on He has inspired people to commit themselves to the best interests of others. This is the time of year when we remember that God sent His only son to serve, not to be served.’

He ends the reading by saying: ‘The carol In The Bleak Midwinter ends by asking a question of all of us who know the Christmas story of how God gave himself to us in humble service. What can I give Him, poor as I am?’

It then goes into Alexis Ffrench’s beautiful piano rendition of the festive favourite as the Prince continued to recite: ‘If I were a shepherd, I would bring a lamb. If I were a wiseman I would do my part. The carol gives the answer. Yet what I can, I give Him. Give my heart.’

Musician Alexis Ffrench thanked the Princess of Wales for hosting the event, and said performing at it was ‘such and honour’.

Messages from celebrities including Dame Judi Dench, Ashley Banjo and Martin Kemp were also included in the show, which was broadcast on ITV.

Actress Dame Judi reflected that the Queen’s annual Christmas message was a tradition in her family.

She added that she remembers the Queen’s first Christmas broadcast, with a clip shown of the young monarch addressing the nation shortly after she ascended to the throne.

‘The #TogetherAtChristmas Carol Service is a celebration of the people and organisations that make our communities what they are! Join us to watch this evening as we pay tribute to them and Her Late Majesty Queen Elizabeth II,’ a tweet on the Prince and Princess of Wales’ official account read. 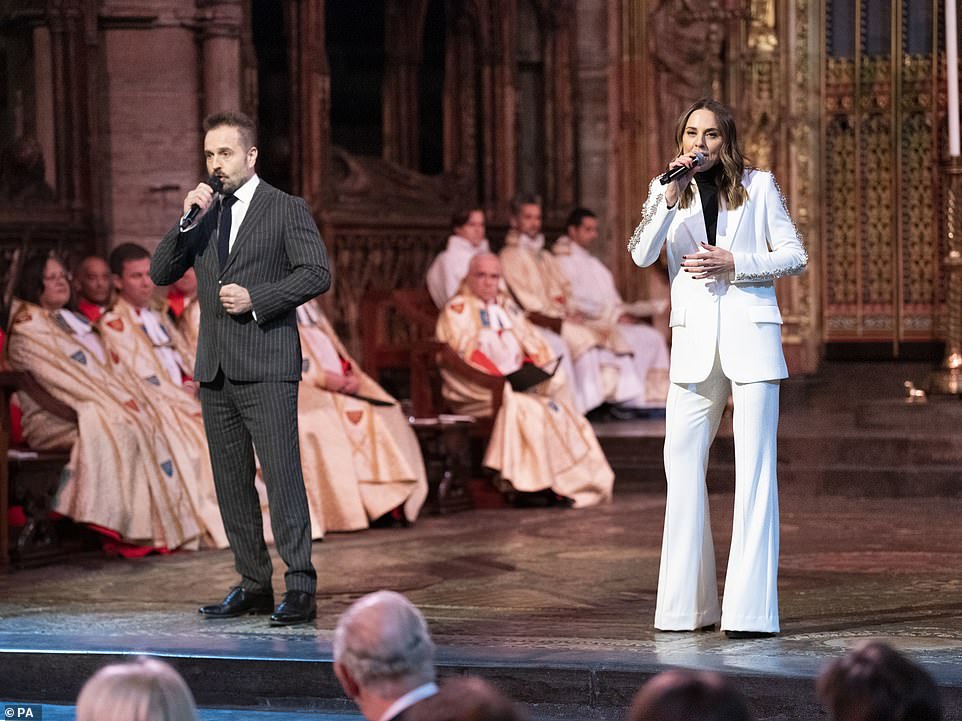 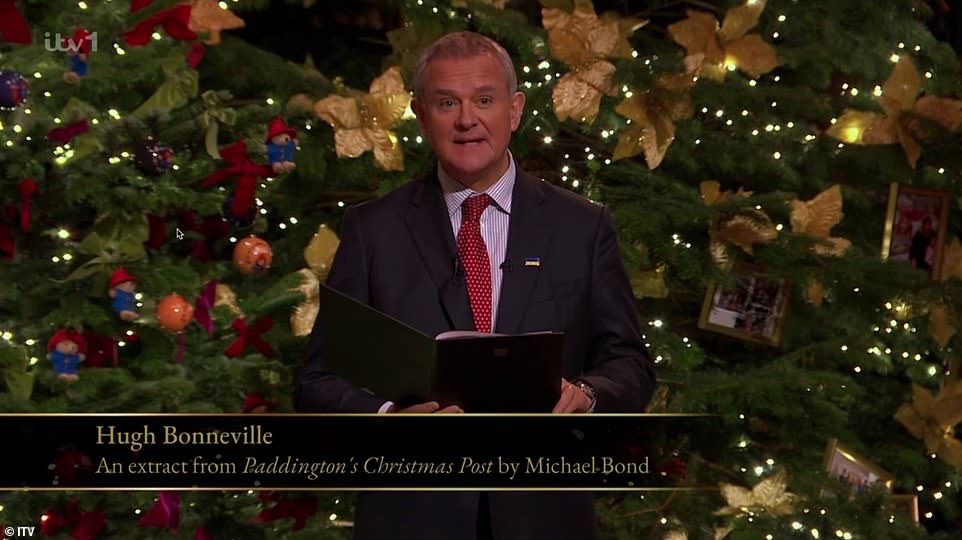 This year, the Princess invited hundreds of ‘inspiring individuals’ to the service to recognise their contributions up and down the country.

She described them as: ‘Those who showcase the power of connectedness and community values, allowing us to continue Her Majesty’s tradition of recognising and thanking those who have gone above and beyond to support others.’

And she added: ‘Her Majesty leaves with us an incredible legacy and one that has deeply inspired many of us. This year’s carol service is dedicated to her and to all those who are sadly no longer with us. 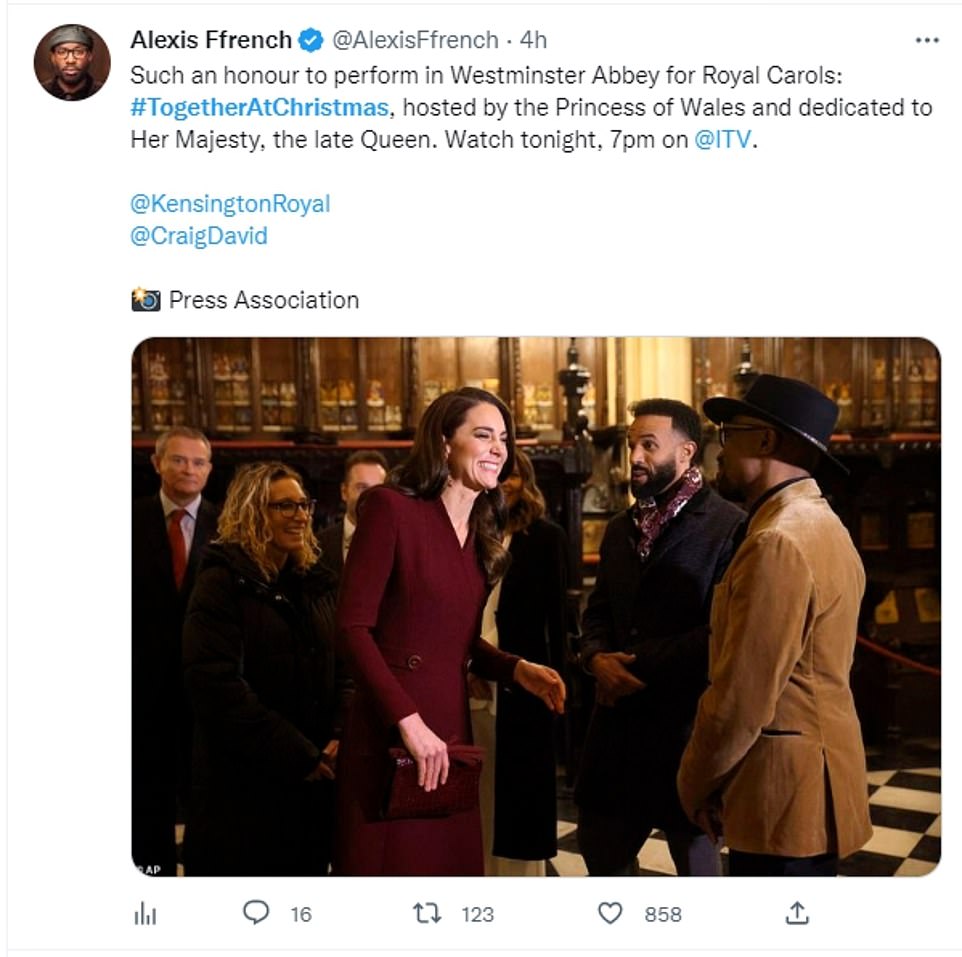 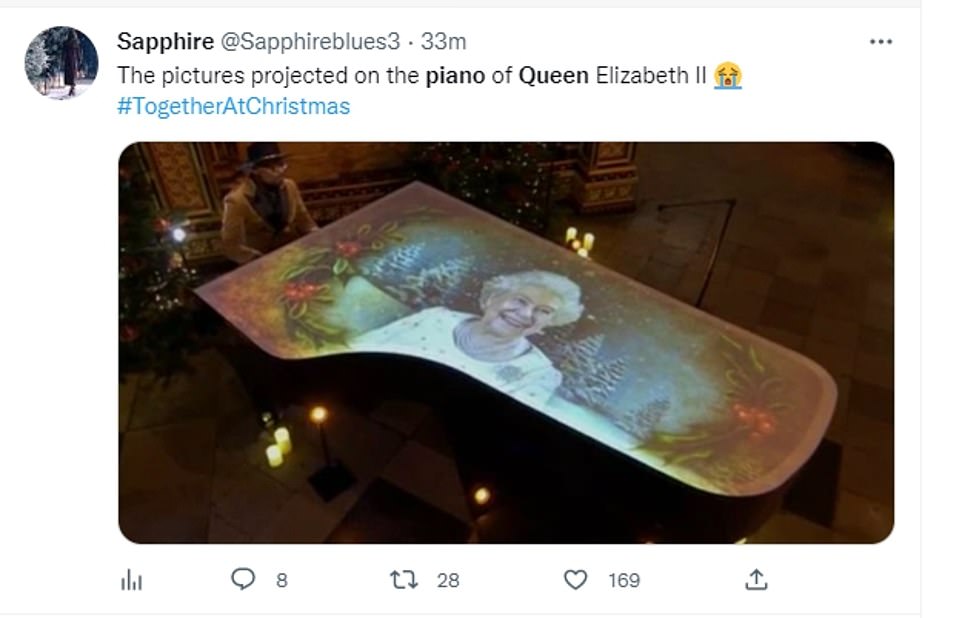 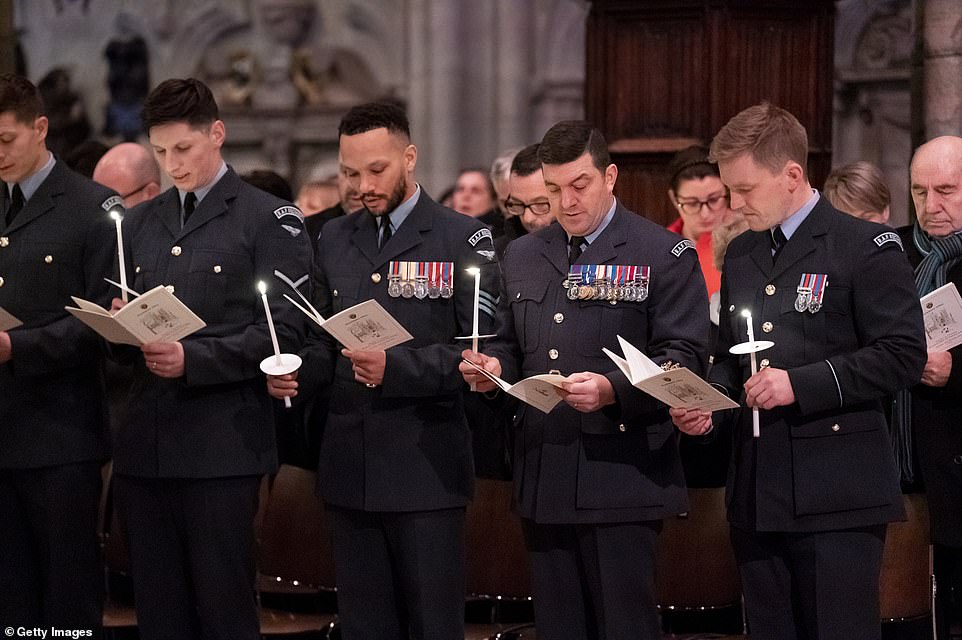 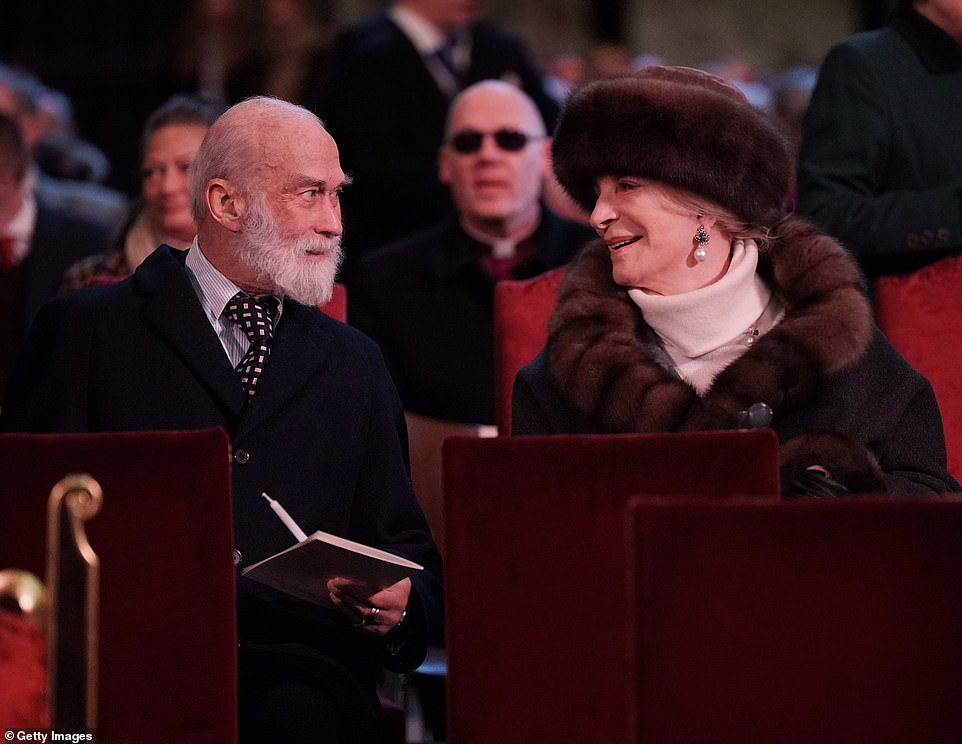 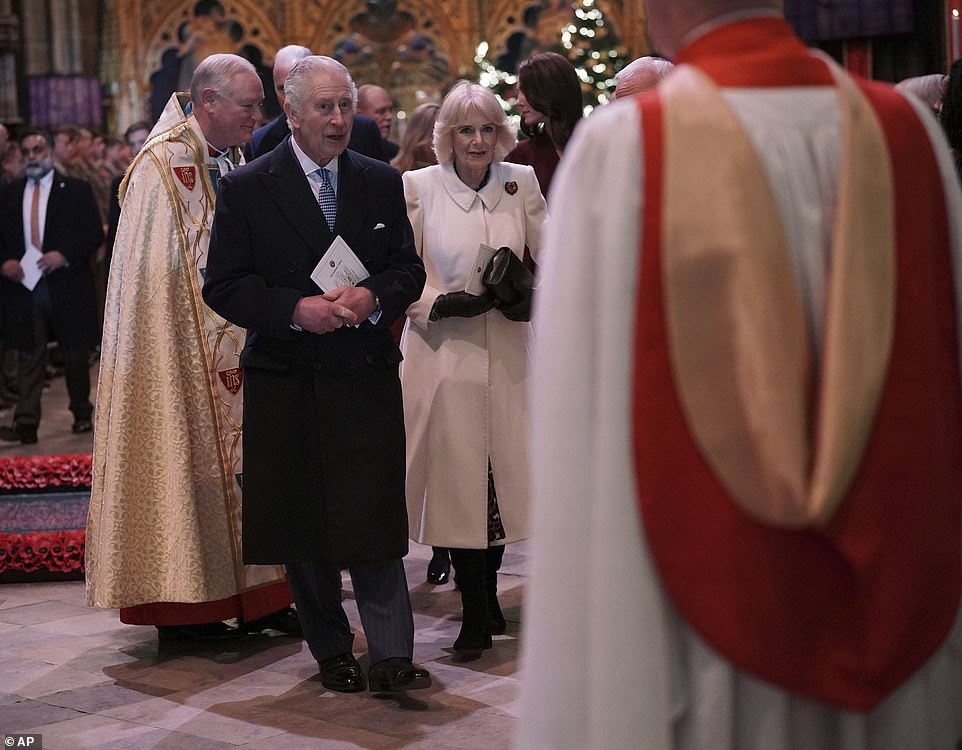 King Charles III attended the event with the Queen Consort, Camilla. He was the only one of the late Queen’s children who appeared to be in attendance 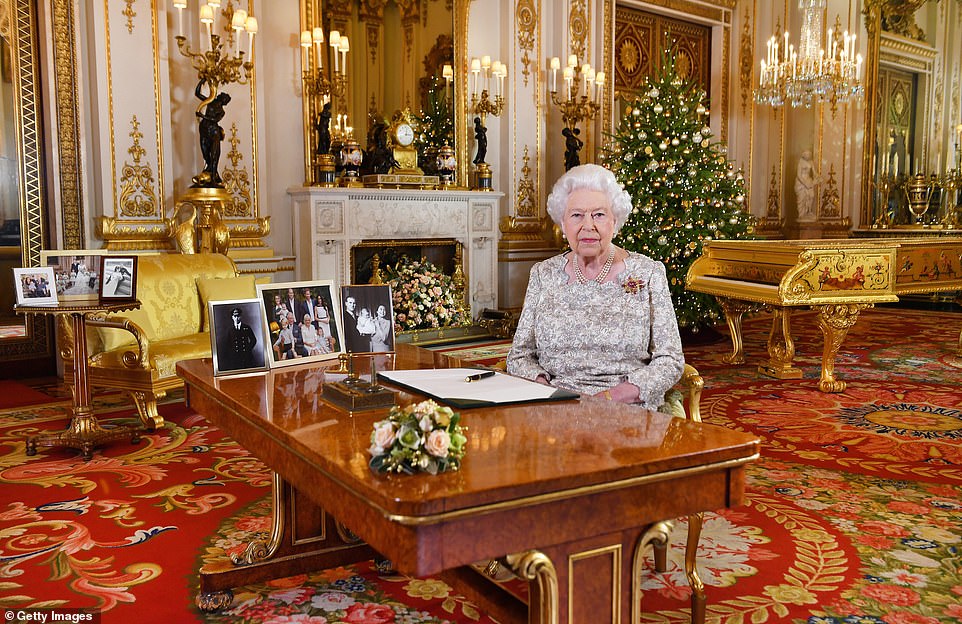 Queen Elizabeth II poses for a photo after she recorded her annual Christmas Day message in 2018. After the death of Her Majesty this year, King Charles III will broadcast his first Christmas message as monarch tomorrow 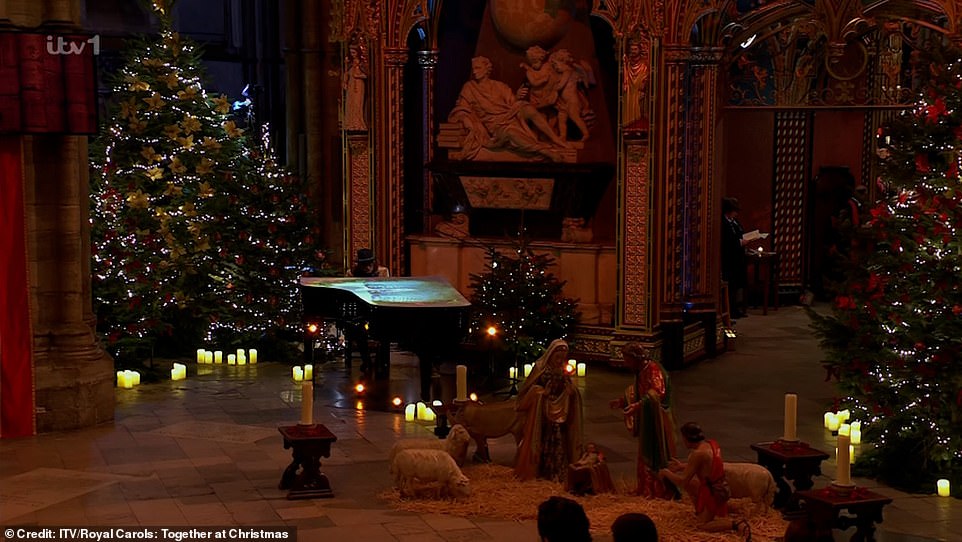 ‘So, whilst Christmas will feel very different this year, we can still remember the memories and traditions we shared.’

The service took place on December 15, just hours after the final part of the Duke and Duchess of Sussex’s bombshell documentary dropped on Netflix.

It was narrated by Catherine Zeta-Jones, and features tributes to Her Majesty The Queen and short films highlighting individuals who go above and beyond to support others.

With the service supported by the Royal Foundation, one of the people that the Princess was keen to highlight was Inna Hryhorovych, headmistress of St Mary’s Ukrainian School in London, whose workload has increased dramatically since the start of the conflict in Ukraine.

Ms Hryhorovych is seen receiving a letter from Kate thanking her for the care she provides to the families and children attending the school.

Her children’s choir’s performance of O Come, All Ye Faithful was one of the most moving of the night.